The joy of playing with the kids is that I feel young again...

We were at the Pasir Ris Park...again... the kids played from station to station. In the park there is a maze where I coordinated a game of catching with them.

I made up rules as we go along... they followed obediently. The game was simple but they had fun complying to my silly rules. But the thing is, it made me feel like a kid again. Chasing them or being chased by them, it made me forget about who I was. No longer adult, but an over-sized, over-aged kid. 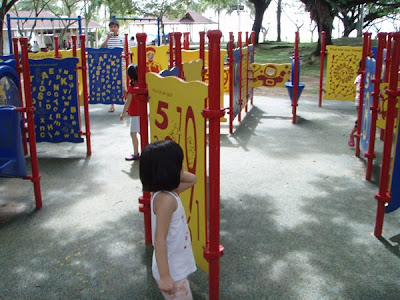 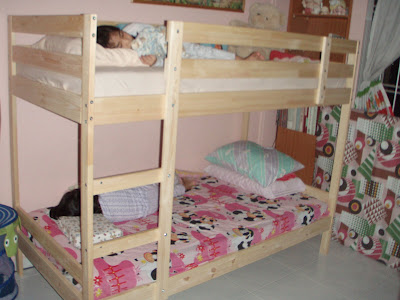 To prepare for the soon coming Prince, we have bought a bunker bed for the Princess. It arrived over the weekend, and as soon as it was fixed up, the kids helped to wiped it down and quickly placed the mattresses on it.

The exciting part of course is to climb up to the higher deck. Isabel was the appointed one to be sleeping above had the chance to climb first.

But new furniture comes new problem. We realized the fan's position can't satisfy both of them, one of them is always getting lesser share no matter how we tried.

So either we have to buy an extra fan or let them have the air con through the night.

i love sleeping on the top too! Remembered how i "fight" it out with my sister last time too!