His grip is very strong, able to hang on his own weight. I remember Isabel was able to do the same at the same age, she could hold for a full minute before losing the grip. I believe Jared has the potential to do better.

Email ThisBlogThis!Share to TwitterShare to FacebookShare to Pinterest
Labels: Jared 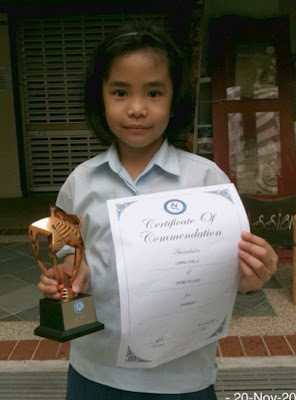 I don't think I've ever got top 10 in my class when I was in primary school... even for the kind of standard 30 years ago. Now, they have raised the standard of primary 1 to an astonishing level which I was kind of worried for the kids.

The first time I saw those text books and its content, I knew I would not be able to do it 30 years ago...

But I'm proud of what Isabel has achieved, being the top 3 in her class.

Her school has an Annual prize presentation day to honor and award those that has achieved well academically. She was there to receive her trophy and a certificate of commendation.

I know I've pushed her hard before her exam with lots of past year papers printed out from the Internet, given her more attention to the point of neglecting the younger ones. But this is the payout... Somehow this trophy meant more to me than it does to her.
Posted by Ricket 2 comments:

Its amazing how 2 sisters are so different in characters and the way they think and do things even when they are brought up in the same house.
The elder sister has always been fond of dance and songs. She did her Kindergarten concert performance twice and during the weeks of rehearsal, she practised at home every night, even taught her sister the whole song and every move that comes with it, so that they can practise together.
**************** 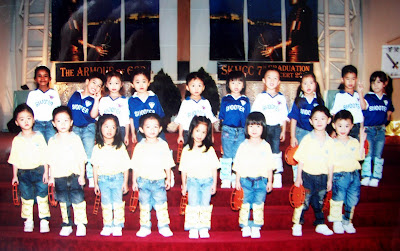 Last weekend was Ally's first performance in her school's Kindergarten Graduation Ceremony. For weeks, she has been rehearsing her dance moves in school... and only in school.


We have been trying to get her to show us the dance or sing the song but she simply refuses to do it.

Her only reply... "Watch the concert."

During the concert day, she remained calm and collected. But still she doesn't want to reveal the dance move. 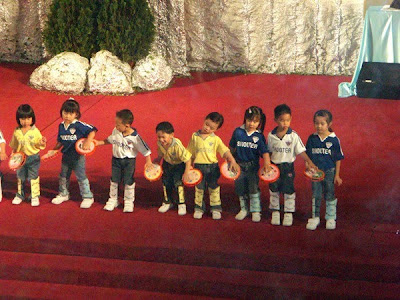 When we arrived, there was already a long queue of eager parent waiting to go into the hall the watch their precious perform, we were ushered to the second floor for seating. But I sneaked out before her turn to perform and went looking for her to film her preparing for the entrance and also inform her where we are seated.

When she came out to perform, I can see that her eyes were darting here and there looking for us. When she saw us, her smile lite up her face.

She did 2 items, both of which we watched for the very first time. She did very well even without any rehearsal at home. 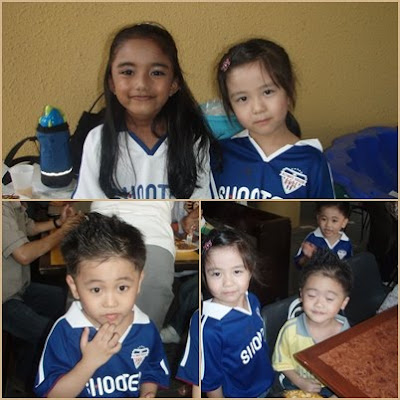