"I want you to write me a composition of what you've done this holiday."

"What? The whole holiday? But I can't remember what I've done!"

"Well, then you better start thinking, because I'm sure your school teacher will ask you to write something like this when school starts next week"

Although 30 days of holiday seems like a long time, but it passes with a blink of an eye. Sad thing is, we didn't take enough time off to spend it with them. We did what we could... stayed in a chalet for a weekend, brought them to watch movie...

Other than with us, their god-parents brought them out too... to those giant "Hamster Cage" and to Botanical Garden where they can work out their energy.

But still, I wished I had done more for them, holidays should be made used the best of it. I wasn't prepared for it... work and financially... I've seen parents either brought their children oversea for sight seeing or have prepared for them a series of enhancement classes to participate. I've only given them worksheets and spellings... something is still missing...

I guess its my full attention for them.

The last time I brought them bowling was the beginning of the year, they were using the 8 pounds, throwing awkwardly into the alley.

Last Sunday, friend of ours booked a lane in Tampines SAFRA for the kids. They specially raised the buffer to block the drains so that no matter how they threw, they will score something somehow. 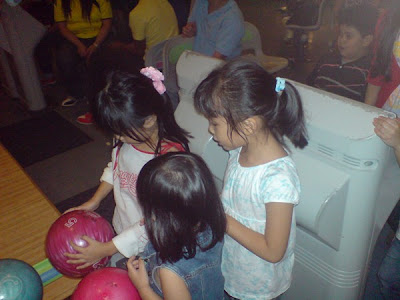 The kids use the lightest 4 pounds balls with 5 finger holes in it. 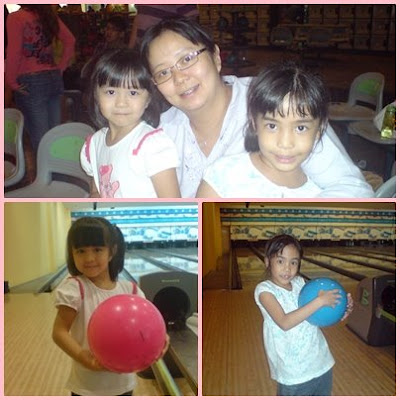 They each found a suitable ball but Ally couldn't fit into their smallest bowling show. But they were nice enough to let her wear her non-marking track shoes to play. 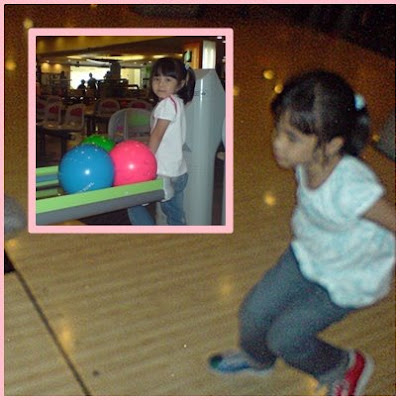 Isabel couldn't keep it straight most of the time, in the end, she actually lost the game to Ally. But of course, Ally had me to help.

It was a very nice way to spend the hot afternoon in the cool of the bowling alley, the kids enjoyed the exercise and learned a new skill.
Posted by Ricket No comments: 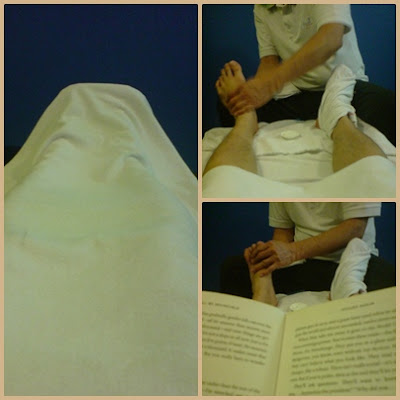 I've always been giving my wife foot massage, she keeps telling me how much she likes it but I don't really fancy it myself.

To improve myself, I have to learn from the pro... so, I booked a foot-massage session in Compass Point level 4 to observe their method.

But the guy's main purpose seems to be trying to find my breaking point and enjoyed watching me endure the pain.

At first I hid my face behind the book and made faces as he squeezed a nerve. The pain shot through my body and tears flowed out o my eyes.

By the end of the session, my feet was no better and the muscles in the rest of my body was more tensed than ever.

How could anyone enjoyed such a session? What medical benefit does it help? Maybe its the way that locals do it. I remember getting a Thai foot massage from Thailand, its totally different, I fell asleep in the session.

Here, they make sure you are kept awake.
Posted by Ricket 2 comments:

Few of my friends got together and asked another friend who can play a guitar very well to teach them how to play. I got wind of it and wanted to join them. 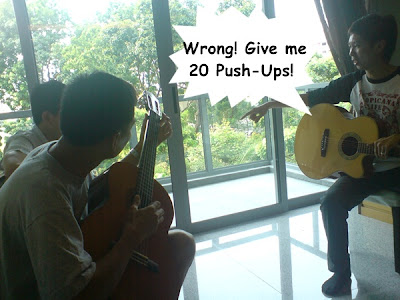 I dropped in at their 2nd lesson but managed to catch up with them. I've always wanted to learn, but never got to do so. I got the guitar but its been sitting in the store room for years... Finally. 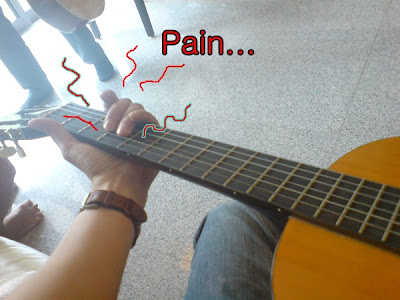 I never known that learning to play can be so painful. The 3 fingers were numbed for days, but I'm determined to learn it so to show the kids that they should not quit what they've started.
Posted by Ricket 1 comment: 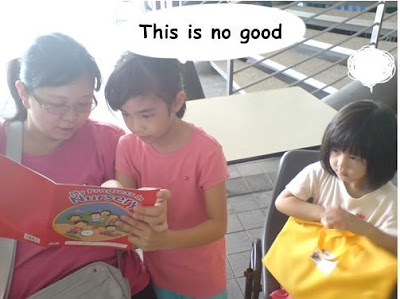 It been a full term since Ally been to the Nursery, we, the parents are anxious to find out how she has been doing all this while. During the meet the parents session, we had the chance to find out...

The teachers told us that she as been very responsive when answering questions, could answer in Mandarin, which comes as a surprise to us as she hardly speaks Mandarin to us.

Teachers also told us that she can be quite sulky in the morning, especially the earlier part of the day, she looks sleepy and "sour-face". But not since we changed her to the 11.15am class instead of the 8.15am class. She has been happier and more active in participation.

Teachers who has taught her and Isabel noticed the similar mannerisms in them, even the Principle agreed on it.

But over-all she is still a good student, well received by everyone. Now I'm looking forward to watch her perform in the year end concert.
Posted by Ricket No comments: 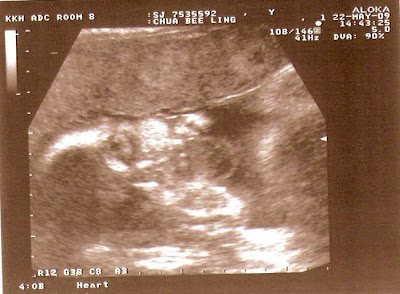 We did a detailed scan for the baby, confirmed the confirmation that its a boy. 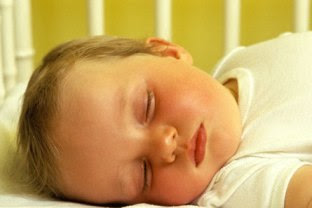 In case you couldn't figure out the position of the baby, you can reference this baby they are in the similar position.
He is growing very well and is expected to be bigger than his sisters at birth.
At 32 weeks, his mommy is already complaining of the backaches and other related discomforted.
Baby is more active comparing to the previous 2, he's always kung fu fighting inside, stepping on mommy's bladder causing her to frequent the "Happy Room" more than ever.
Now I'm trying to think of his chinese name. All will be revealed soon.