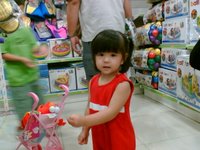 We were at the new Vivo City shopping around... the place is HUGE! Because of the crowd, we only managed to get into the Toys "R" us, its also very crowded, but its Ally that's having a ball there with all the toys around her.


Once in there, she was just awed...
We let her push a baby stroller with the Elmo in it, although the place was jam-packed, she managed to maneuver the stroller pretty well, but of course still tripped a few customer. 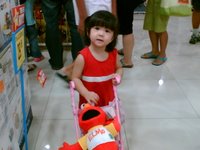 I think being a second born, Ally didn't have much of her own toys. Most of what she's playing are those from her sister, not exactly suitable for her age.

So she love being at the baby toys section, where there's a wide selection of stimulating toys. Colorful buttons that makes music, flashing lights with small surprises...

She cried and kicked when we dragged her out of the section. 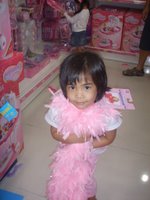 On the level 2 of the shopping mall, there is a unquie playground with water feature. Kids can enjoy the water, whip out the soap and bath there (just kidding) 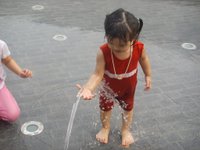 The kids are all drenched, but they really like to play there. 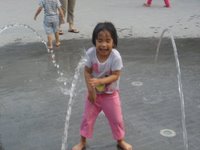 Isabel was born 4 years ago today in the morning 5.26am
I remember every details... Watching her come to this world. I stood by my wife's side as she struggled with the pain of child labor pushing our first born out with all her might.
When I first saw her... I turned to my wife and all I could say was: "She's beautiful!"
She is, to me, the most beautiful baby in the world... 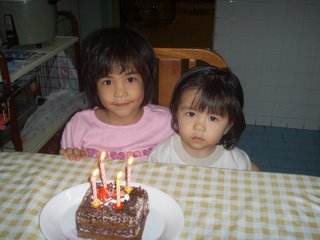 This year we have been celebrating her birthday over the weekend in several places: 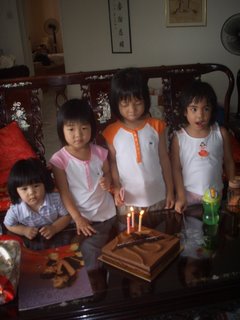 Celebrated at a friend's place with other October babies 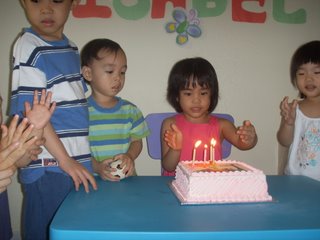 Our own place with a few friends

A lot of times when we go for an interview, the interviewer will ask a typical question: "How do you see yourself five years from now."

I never imagined myself to be a father... But now I am.

I never imagined myself to have a waist line of 33 inches... But now I have.

I never thought I could love my wife more than I was loving her... But I can.

As we sat in the restaurant celebrating out 5th Wedding Anniversary, I recalled the day I took her hand and walked down the aisle to say our vow. It seems like yesterday... I still remember decorating our own house, getting all excited over everything...

If I can go back in time and live these 5 years again, I would change one thing and one thing only... I would buy the flat from another more quiet location, everything else will remain the same.

I love my wife... Wouldn't change anything else, especially her. 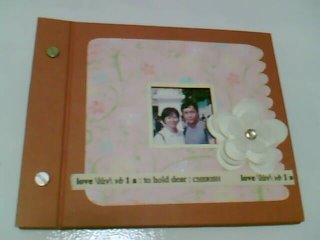 5th anniversary is also known as "Wood" anniversary, I tried to convince her to play along, to have our theme base on wood, buy presents that has something to do with wood.

I thought for a long time... searched through the web, but couldn't find anything suitable, so in the end I got creative... I made a small photo album and pasted photos of our courtship to our latest family photo with the children. I made everything from the paper pattern to the little flower.

I wrote notes of thoughts next to the photos, drew some 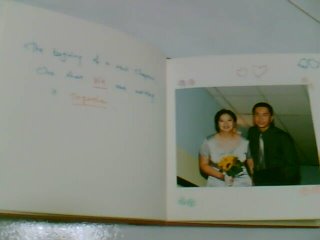 cartoons here and there... felt like a teenager again... ha ha...

My wife bought me a bottle of Mont Blanc aftershave. Love it.

Looking forward to the next one. 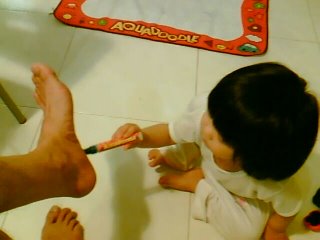 Ally getting creative with my foot.
Good thing its just water. 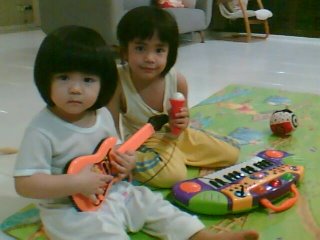 If they are really going to be a band, I hope they'll use their talents for Praise and Worship in church. My wife wants me to learn guitar so we can have sing-a-long sessions instead of watching TV every night. 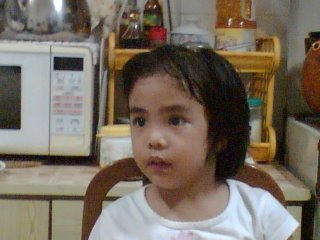 Its a tradition for my family to have reunion dinner on certain dates of the year. Namely: Chinese New Year Reunion Dinner, Mid-autumn Reunion Dinner and Winter festival Reunion dinner. These are the 3 dates that cannot miss.

Last night was the Mid-autumn reunion dinner and my parents as usual prepared a sumptuous dinner enough to feed a small army. My lovely wife also bought some of Isabel's favorite Char Siew for everyone.

But Isabel wasn't really in the mood for food as she was really tired. Because her cousin can to our home to play. And so the whole day she was playing toys and watching TV without nap or proper rest. By dinner time she started to feel the toil of the day and dozed off in the middle of the dinner. 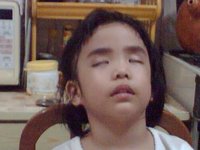 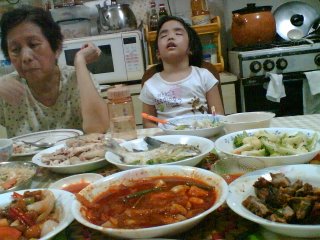 Even with all the delicious food right in front of her, she can't keep her eyes open long enough to finish the meal.

I let her cat-nap for a while, 10 minutes later she's alright again. 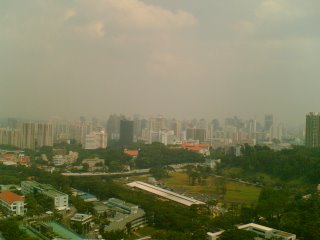 Take this chance to take MC and stay at home loh!!!

Thanks to the haze, many of my colleagues are doing just that, coughing and wheezing when the boss walks past them. Next thing you know... MC the next day.

On a clearer day, I can see pretty far... 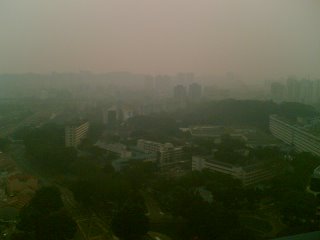 But when haze got worse... see for yourself.

The 2 pictures are taken on different days but same time of the day.

I remember the last time it got this bad was 10 years ago.

I was young and innocent, thought it was quite funny to see haze, but now, I'm very concerned when can it clear up, afraid it might cause any damage to my children's health.

Well... let's pray for it to clear so we can breath healthy air and see the clear blue sky again.
Posted by Ricket 1 comment: 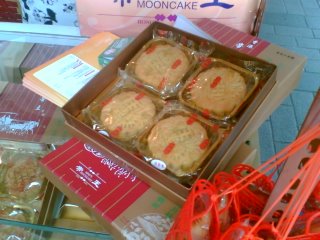 The history of moon cake:

Long long ago, China was in revolt against the Mongols. Chu Yuen-chang, and his senior deputy, Liu Po-wen, 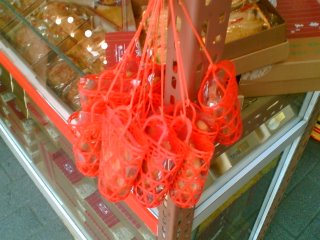 Liu dressed up as a Taoist priest and entered the besieged city bearing moon cake. He distributed these to the city's populace. When the time for the year's Chung Chiu festival arrived, people opened their cakes and found hidden messages advising them to coordinate their uprising with the troops outside.
Thus, the emperor-to-be ingeniously took the city and his throne.

Now, of course many will take it as a festive season to feast, and because of that night will be a full moon night, elders like to think of it as a day of reunion, a day when all family members will come together for dinner. 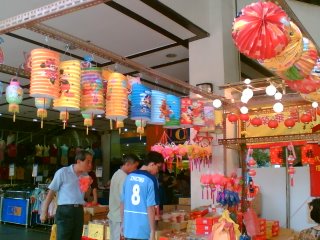 Children after dinner will carry the lantern and walk around the neighbourhood.

Traditionally lanterns are made of paper and bamboo sticks lighted with a stick of candle inside.

But now, lanterns comes in shapes of blown up dolls lighted with a light-bulb, most of it comes with music.

The new ones will of course be safer for children, but I find the tradition ones to be prettier, especially with the little flame flickering in it. And when by "accident" the lantern caught fire, I have an excuse to buy new one. 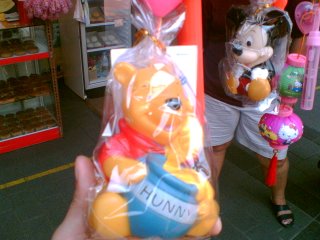 This Winnie the Pooh lantern is a product from Disney. Cost S$7.
Crazy right? 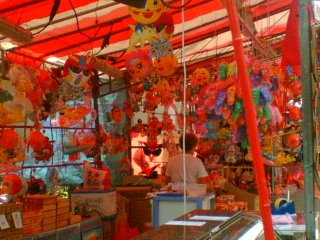 I walked around Chinatown looking at the lanterns, most of them are selling S$7. One elderly stall owner told me that this year the production is lower, almost couldn't get lanterns to sell. 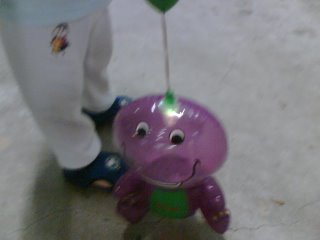 I bought a Barney lantern for Ally, she loved it so much couldn't let go of it. Even Isabel cannot hold it for more than a minute. If Isabel trys to snatch and run with it, Ally will chase and pull her hair when she catches up with her.
Posted by Ricket 7 comments: