Just the weekend, I thought of letting the kids try bowling... The thought of seeing them lug an 8 pound ball would be quite amusing. 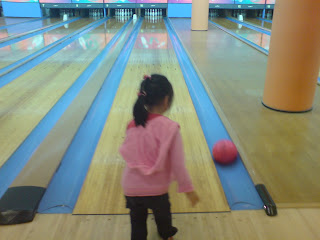 The kids excitedly picked out a couple of pink bowling balls and went to the lane. But approaching the lane with the right rhythm is impossible for the them, so I told them to carry it with both hands and walk as close as possible. But of course, almost everytime they only managed to wash the drain. 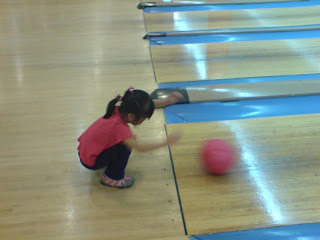 Then Ally the "Squat low and push hard" method and had better result of knocking over a couple of pins. 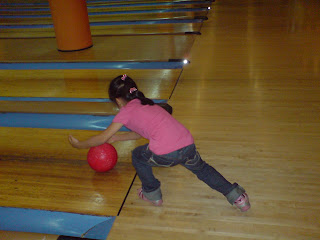 Isabel wanted to try with a little more style, she would have succeed if her aim had been better.

The idea is not to train them to be good bowlers, but just to have fun and boost their confidence approaching and trying new things.

Remember earlier when we brought hamster for Isabel? Well, there are little hamsters already.

I didn't notice the pregnancy until I saw the bedding moving from underneath, and took a closer look. There I found a pink hairless fellow wriggling blindly around.

I didn't count how many as I was worried that me being there will cause to irritate the mother and eat the babies. 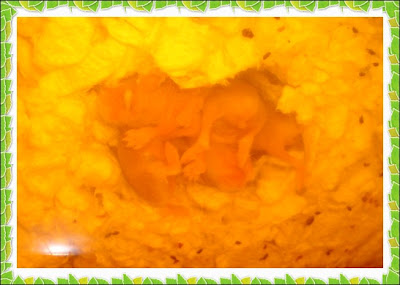 I retreated and went to work, but later realized that I should have separated the father from them as I was told that he too has the tendency to eat the young.

By the time I reached home, my older daughter told me she saw a feet dangling out of the mouth of the daddy. I couldn't imagine what I would find when I open the cage and clear the bedding... a head here?... a tiny leg there?

I put on a pair of latex glove and braved myself when I prepare to open the cage. I imagined nothing was there but blood and tiny intestine...

But instead, I found 4 wriggling hairless babies. The startled parents started to run around, it caused me to panic. My lovely wife was at my side, shouting: "Grab the male one! Grab the male one!" But they both look the same!

I took a guess and went for the one nearer to me, turned out its the male one. 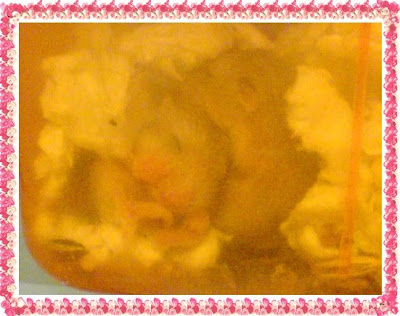 The babies after a week and a half, have grown hair and started to move about more. 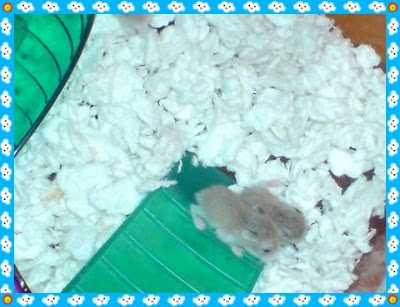 The 4 of them survived for 2 and a half weeks until... 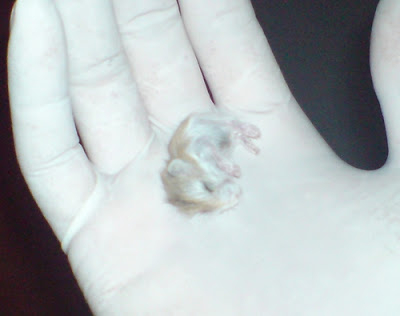 The morning I found it in the drinking pit, it was shivering. Its the smallest of the 4, often squeezed out of the warmth of the mother's buxom and denied of the milk. I often had to push it back to the crowd but...

That evening I found it dead, buried in the bedding...

I watched them born and helped raised them. Colleagues have expressed the interest of taking 2 of them, but I don't think I'll be giving any away.

Ally was very excited to go to the Nursery which her sister has been attending for K1 & K2. Ally has been there several times before, she knows the routine the teachers, she has been talking about this day for the whole holiday.

Her bus will come at 7:15am, usually, she is still asleep at this hour, but she got up without kicking a fuss, prepared herself to go to school. 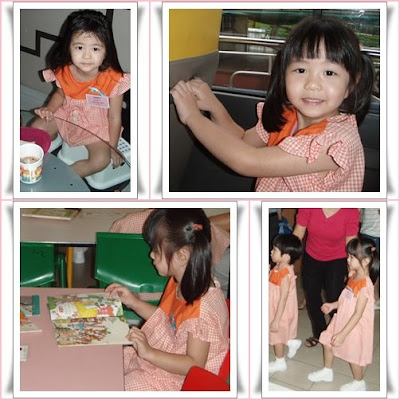 In class, she was very well behaved. Although she kept yawning and tried to look interested in the things around her, but I know that she is starting to feel sleepy. 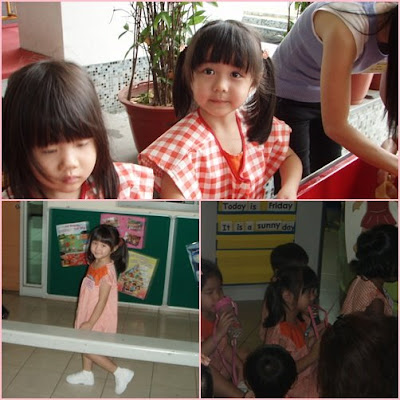 They played Water-Play and listened to teachers tell story, ate together during tea-break, learnt to pray before eating. 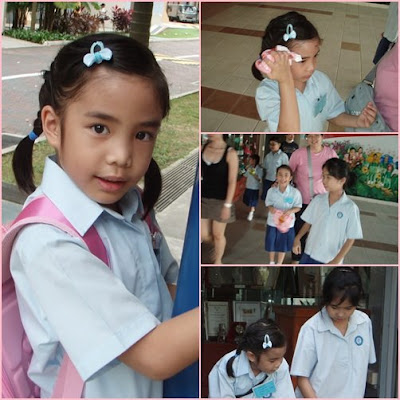 Isabel had a tougher and longer day for her first day of Primary 1, its my fault that I have described primary 1 to be such a "No-Fun" place. She was feeling very apprehensive about going to school. Her face turned green when the school bus arrived and required a little hard persuasion to get on it.

But as we saw her in recess time later, she was better and made friend with an older girl who was assigned to help her familiarize with the school facilities.

Its really tough to see her go to school for such long hours everyday, she looked so tired when I fetched her in the evening. I hope she adjusts well and fast to the new routine and be happy in it.
Posted by Ricket 3 comments:

A week ago we were having dinner in "Chomp Chomp", and while eating a chicken wing, Isabel suddenly turned to her mommy and complained of a loose teeth.

Mommy looked and was surprised, not because of a teeth was becoming loose, but because of the new teeth was already protruding from behind it.

I saw the position of the new teeth and was very concerned. Questions ran through my mind, why isn't it under the old one but behind it? Would it require surgery to make it right? Can braces correct it? How much would it cost? How would her friend tease her? Can she cope the stress?

But Isabel has other concern... seeing the dentist. She has lost appetite for dinner that night.

The nest day my lovely wife called up a few dentist in the area, found a nearby dentist who's next available date is few days later. For the rest of the week, we tried to pray with Isabel, encouraged her, explained to her, described the procedure to her but she was still very gloomy. I've tried to persuade her to let me pull out the teeth for her but she simply kept her mouth shut and shook her head. 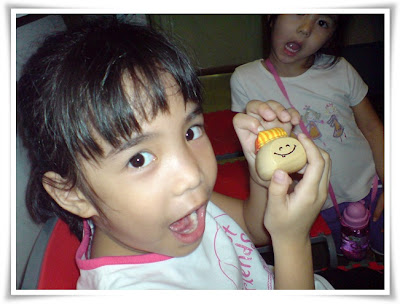 On the day, we gave a little container to bring along and told her to place the teeth in it once the dentist pulls it out. 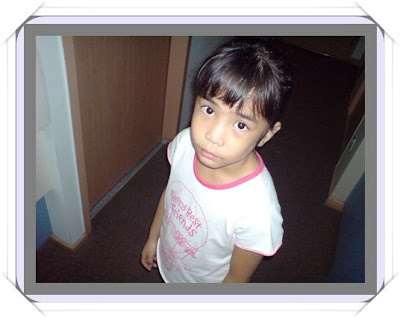 When it was her turn, mommy walked in with her. Upon seeing the dentist at the chair, with all the sharp gadgets, she began to cry... I can't say I wasn't expecting it, it was her first visit anyway.

The dentist wasn't pushy, he just showed her the use of some of the tools there to calm her down, after a while Isabel walked out of the room with her teeth still attached there. That "orientation" visit cost us $15. The dentist assured us that the new teeth is normal to grow there and there is nothing to be concerned about. 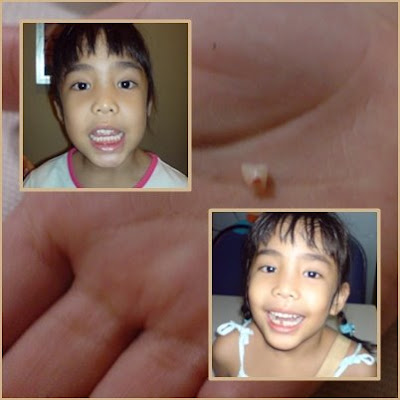 During the same night, as she was grouchily sitting in front of the TV, I asked her: "Is the teeth bothering you?" she nodded her head.

"Can I pull out for you?" She was very reluctant, but still agreed.

I used a pair of clean pliers but it couldn't grip. So I gave the teeth a few more shakes, placed a gauze over it gave it a thug... It came out half way and was bleeding at the base. Isabel was making a lot of nervous noise but was not aware that it was almost out, I gave it a second pull and it came loose.

She was very glad that it was finally over.
Posted by Ricket 1 comment: