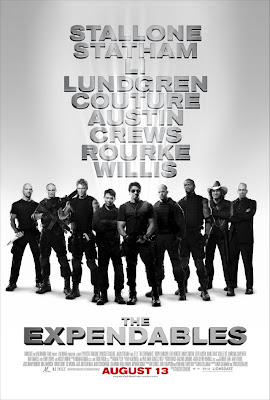 The show has plenty old action heroes, its like a reunion for them. Arnie, has a 2 minute scene just talking sarcasm with Sly. They look more like a divorced couple trying to step on each other's toes while keeping a smile in front of Bruce Willis.

Sly is more into this character than he was in Rambo 4 which that show was a disappointment as he could not bring out the character of Rambo anymore. He was just... him.

Mickey Rouke shed a tear while in the scene where he explained why he is no longer the killing machine, and how his soul has died in him. I think he is perfect for this role and has done a wonder job portraying this character.

Jet Li , being smallest and the only Asian, he has to try real hard to fit into the gang. He really doesn't look comfortable among the muscle clad bunch whose average height is 2 heads taller than him, and he has to appear to be in a "bo-chap" attitude which is not really convincing.

But overall, the movie is entertaining, the flow is good, believe it or not, all the good guy survived. Which guess makes it a happy ending.
Posted by Ricket